It often breaks my heart when I miss an incredible art event. And my heart is indeed broken today and may in fact be for the next few days. I've been finding myself almost hostile towards people on Facebook that saw Coco Fusco's performance on December 12 and 13th at the Studio Museum in Harlem Observations of Predation in Humans: A lecture by Dr. Zira, Animal Psychologist (study), 2013 - See more at: http://www.studiomuseum.org/event-calendar/event/coco-fusco-2013-12-12#sthash.cyWeUnBN.dpuf. My feelings boarder between straight out jealously and awe for their having seen a monumental event that continues the dialogue, of how “other” (in this instance black women) is perceived and experienced within our current economic and social structure largely governed, if not completely, by racist colonial histories. Where was I on those nights? I am not free to disclose. But I can say that on one night I was in a room with largely affluent straight white men talking about art....

Recently, I posted a link on Sophia Stewart’s winning a suit against the Wachowski Brothers, Joel Silver and Warner Brothers for copyright infringement. Stewart is an African American writer who sees too many similarities between her 1981 copyrighted screenplay “The Third Eye” and “The Matrix”. For ten years now, there has been a cloud of debate accusing Stewart's winning the suit as a hoax. What I have found interesting is the idea that the face of this billion dollar franchise is one of a black woman contesting existing power structures and turning it upside down. “Neo is really a black woman” should be a tee-shirt.

What's troubling about Fusco's performance and how it connects to Stewart's “hoax” is that the idea of other redefining visual culture is confined only to the walls of the art institute and the imagination. For me that's what has become frustrating about making art. The viewing of provoking pieces inadvertently highlights the commercialized tourist trap of the museum and blunt disregard of some institutes to accept funding even if connected to the disenfranchising of communities of color (ie: the Metropolitan Museum of Art's expansion funded by one of the Koch brothers). The subversive power of the artist to ask people to reconsider society's current evolution and reflect on where its going are sadly dulled and limited. I cannot comment on Fusco's performance, and as a long time fan, I'm sure it surpassed wonderful. Yet, I wish her ideas last week were part of a much needed critical look at how other is still regarded in media and how reconsidering it and giving other power can truly move progress forward. And this, reoccurring debate, addressed by writers like Franz Fanon, Arundhati Roy, bell hooks, Fusco herself and others is threatening. As we look at the treatment of the black female body, her militant and intellectual strength is not myth, it is our salvation.

With these thoughts I go into my next book, NATIVE SON by Richard Wright. The copy I have I got in Thailand in a small bookstore run by an American Ex-pat in 1998. It was sold to me by a Danish traveller who was watching the shop.
Posted by Alicia Grullon at 2:53 PM No comments:

A People's History of the United States

A Game of Thrones is back (like we need anymore Anglo/Celtic centered stories on TV)! But I still watch it. The diabolical family dysfunction is mesmerizing. How they got such a great cast is a secret worth selling. I bet that somewhere sometime, GOT will become part of some insane history book along with magical science. Better than creationism I suppose.

It was very hard to start reading again after Awakenings. Nothing has been as good; almost like trying to recreate having a good cup of coffee after travelling to the Spanish Caribbean or France. I was so satisfied. This being the case, I decided to scrap one of my rules. So, instead of having to read what automatically follows, I'm choosing the next book I read from my bookcase. That's how I landed with Howard Zinn's book.

One of the things, I loved most about Awakenings was that it tapped into my love of history, the lived history of the population so often over written by political and commercial agendas. There's nothing like reading Zinn on a long NYC subway through the boroughs: It's seeing the after effects of US history uncensored.

I've only read up to the Revolutionary War and boy do I want to sit in on my kids' history classes in the future. How can a true recollection of events be given an honest overview in order to prepare our youth to critically take part in improving their society? Is the average citizen capable of reconsidering historical happenings truthfully. It seems that everyone is either emotionally exhausted, vacant, or too over indulgent (and overworked, underpaid, and in debt) to be open to insight or even care.

If anyone has any questions about why recent initiatives have been taken to introduce more limits on citizen rights and perhaps offering the dialogue of disarming everyone including police and security guards along with the whole nation and army, I would suggest reading the first four chapters of A People's History of the US. Complete disarmament is never going to happen. So I guess I'm just writing these words because it's as close as I'm going to get to it ever happening.

Will read more and get back.
Posted by Alicia Grullon at 1:06 PM No comments:

I've been thinking about Junot Diaz's call to the people during the opening statements of the Facing Race Conference in Balitmore a few weeks ago. He confronted the audience telling them, “I’m telling you guys, we’re never going to fucking get anywhere—if you want to hear my apocalyptic proclamation which I would never repeat, but which I know you motherfuckers are going to tweet about—we are never going to get anywhere as long as our economies of attraction continue to resemble, more or less, the economy of attraction of white supremacy.” For days now, I've asked myself what other options are there. It seems that all others models have been erased or forced to compromise.

I re-started the Bookcase Project with Awakenings by Pramoedya Anata Toer. It is a 2 novel book about colonial Indonesia at the turn of the 20th Century. There's always a love story in the saddest of times. I think that it's because love tries to mend and fix even if in an imperfect way. Minke, an upper class Native, falls in love with an Indo- a half Native half Dutch girl whose mother was the young concubine sold by her parents to a wealthy Dutchman. In the story Minke struggles with his identity. ALthough he asserts his Native background and any injustice that occurs as a result of his being so, he surrounds his life with Europeans. He cannot write in Malay, the popular language, only in Dutch, the privileged language. I'm at a point in the book where he's been asked to write an article in English, a huge honor. His best friend, a Frenchman, suggests that he begin to write in Malay. Minke violently rejects the idea.

As I read through the pages forming pictures of what Minke looks like, I get a fuzzy reflection in my mind. I'm guessing it's because I have very few hispanic friends (if I have to count, it would be 2). Throughout my life I often felt like the odd: The Dominican kid who liked New Order and the Smiths while everybody else was listening to Dougie Fresh and New Edition. Growing up, I was raised with the belief that I was white (because of my hair), but hispanic. My parents made a clear separation between Hispanic White and European/American White. Children of the 1960's thought revolutions, my parents stressed that the Western Hemisphere/World was raped by Europe. Yet all the while we were still white. Minke mirrors some of my life experience: That limbo between a colonial existence and the existence that may exist beyond it. I am almost convinced that we have to go through it. My parents tried to have us avoid it. I think deep inside they knew we would inevitably have to go through the colonial mash-up existence (it is the world today) and did their best to help us pass.

Toer is an amazing historian. He was imprisoned during the Dutch and then again during the new Indonesian government for his political views. Since no books or paper and pens were allowed, Toer memorized and repeated his novel everyday to himself for two years until he was able to write it down in 1975. He writes about the class system the Dutch developed making me think that there might have been an inter-colonial conference sometime, where all the heads decided on what nomenclature to use in the colonies. For example, Toer writes about those terms used in the Indies: Indos, Natives, specific designations to North East Asians, Europe born Euros and Indies born Euros. They bear a huge resemblance to those used by the Spaniards. Everyone fought to be at the top and pass for White. When Minke loses his wife, I think he loses his hope to accept his being Native. Yet he also loses his hope to be a White. His White supremacist ideas have got a hold on him. Is there some alternative experience than having to go through the White supremacist model? If I look at my work, I think that it has been my way of getting through it.
Posted by Alicia Grullon at 10:21 PM No comments:

There has been a delay with the bookcase. It moved from our bedroom into the living room. All the books have been re-arranged and are on new shelves. I haven't been able to settle down and read as I just finished an artist residency with the Bronx Museum of the Arts. But I did pick up the first book and it's by James Baldwin, "Notes of a Native Son". The book I have was printed in 1968 and it came into my hands when I was 15 years old. My father's bodega is in Washington Heights and he often bought home books from tenants who moved or had passed away. Most were on philosophy, the black power movement, and progressive thought overall. Those books were a social study themselves. Because of the titles I got a sense of the people who lived in the neighborhood at that time. My dad has had that store since 1968 and seen the changes first hand most notably the lose of an active intellectual presence. Through the years, many have not survived the wear and tear of the economic times. Glad to have been able to hold onto this book. Baldwin does not mince words: He makes Beef Wellington with them keeping the meat just cooked enough, but red deep inside.
Posted by Alicia Grullon at 10:46 PM 1 comment: 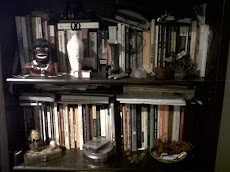